After the clouds, the sunshine,
after the winter, the spring,
after the shower, the rainbow,
for life is a changeable thing.
After the night, the morning,
bidding all darkness cease,
after life's cares and sorrows,
the comfort and sweetness of peace.

Sara Lee Mills Martin, our past Supreme Inspector was born into Masonic fraternalism. She literally spent her first weeks of life at such events as Eastern Star “Pot Lucks” and “Card parties” at the local High School sponsored by Wild Rose Chapter, OES in Princeton, California. She won the prize for selling the most tickets (on her bicycle in the country) to the Colusa County Assembly breakfast when she was 9 years old. This was long before Pledge Groups were a part of the Rainbow program.

Her parents, Annie and Roy Mills were particularly active in the Order of the Eastern Star and Annie was instrumental in the institution of Colusa County Assembly #59, IORG in Williams, California in 1938. Annie went on to serve as Worthy Grand Matron in California in 1959. 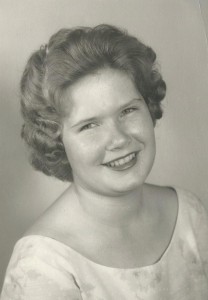 Sara Lee has worked for over 30 years as a Speech Pathologist and Special Day Class Teacher both in the La Habra City School District and as an instructor at California State University, Fullerton in the Department of Speech Communication.

Sara Lee is a Past Matron of Yorba Linda Chapter and plural member of Josephine Chico Chapter, Order of the Eastern Star. She served as Deputy Grand Matron for Barbara Campbell in 1987 and Grand Martha in 1991. She has been Chairman of Grand Chapter Committees including the Masonic Family Honor Session in 1999. She served as Mother Advisor of Fullerton/Yorba Linda Assembly from 1995 to 2000. She was also appointed to the Grand Executive Committee from 1998 to 2000.

Sara Lee is married to Glenn E. Martin a Past Master of Yorba Linda Lodge and Past Patron of Yorba Linda Chapter, Order of the Eastern Star. They have two children and one foster son who was a student in one of Sara Lee’s Special Education classes. Their daughter Heidi was Grand Faith for California Rainbow in 1998 and their son Kenton is a Past Master Councilor of Yorba Linda DeMolay and he holds the Chevalier Degree. Their two grandchildren, Marley and Blaise are the light of their lives and brought such joy into their hearts.

No one was more surprised than the Martins when Anna Lind with the approval of Supreme Assembly asked Sara Lee to become the next Supreme Deputy in California which took place at Grand Assembly in April of 2000. Sara Lee took on the task with energy and enthusiasm. Since then she has been instrumental in bringing progressive changes to California Rainbow.

In 2002, the Area Schools of Instruction were changed to Rainbow University Events bringing new and progressive leadership skills programs taken from the Supreme Task Force products and adapted by the California Leadership Team. Two State Schools of Instruction provide training in ritual and floor work performed by the Grand Officers. The May to December California Communication Connection was made a part of the job of the Grand Recorder that same year.

Revelations at Grand Assembly was changed by this Supreme Deputy in 2003 where offices were announced in random order to emphasize that all offices are equally important to the workings of California Rainbow. This was also the year that the Area Grand Deputy Retreat was started in order to standardize and equalize procedures and provide more meaningful training to Grand Deputies and Advisory Boards. With the allowance of Supreme Assembly, Sara Lee changed the order of Escort in California to have all active Rainbow Girls escorted before any adults in 2004. This was also the year that she promoted the idea of the Masonic Family participation in Make a Difference Month which was adopted by Grand Lodge, Grand Chapter and the entire Masonic Family.

2005 marked the 75th Grand Assembly Session in California. Over two years in planning was culminated by the participation of Lee Ann Meriwether and all other active Past Grand Color Bearers in the presentation of the American Flags during Opening Ceremonies. Sara Lee considers that moment the highlight of her tenure as Supreme Deputy. During that year, the Order of the Eastern Star in California hosted all Assemblies and Advisors for a 75th Birthday Celebration for California Rainbow. This was a picnic, cancer relay and family game event held in the Masonic Community of Paradise Park near Santa Cruz.

Sara Lee would serve the California Grand Assembly as Supreme Deputy and Inspector for 14 years. Sara Lee and the Grand Worthy Advisors were staples at out of state Grand Assemblies, Grand Lodges, Grand Chapters, Grand Bethel and Demolay Conventions. During that time, over $1 million dollars would be raised by California Rainbow for their Grand Service projects. Sara Lee would serve as Supreme Confidential Observer and Supreme Love during her time as Supreme Inspector.

At the Last Official Visit of 2014, Sara Lee announced that she would step down as Supreme Inspector and she appointed Dana Regier as the new Supreme Deputy.

It is hard to put into words the effect that Sara Lee had on the girls and adults of California Rainbow. To many she was a leader, a mentor, a confidant, a friend and a teacher. She was always available to listen and advise. Sara Lee made a profound impact in the lives of so many young women. We have been blessed with wonderful memories and stories of her. She will never be forgotten.